“I took this as a sign of forces greater than me, of strange currents in the air.”

In 1975, Cornelia E. Davis, MD, MPH, was a pioneering African American woman doctor fresh out of medical school. Davis felt an overwhelming gratitude for her life’s opportunities, and sought a way to give back. Her bold choice would benefit millions of lives.

The World Health Organization hired Davis to work in its landmark smallpox eradication program. Davis traveled to India, where she scoured the countryside for the last remnants of the brutal, deadly disease. Connie didn’t allow entrenched sexism, or caste taboos to deter her from her fascinating mission. She tracked smallpox through the Thar desert on camelback and across volatile Indo-Bangladeshi borders. She negotiated with smugglers and fakirs. She met Mother Theresa. She climbed to the base camp of Mount Everest. Finally, her symbolic search for Sitala Mata, the Hindu smallpox goddess, came to a positive conclusion. An international certification team declared smallpox eradicated in India.

As described in this biography slash memoir by Dr. Cornelia Davis, Sitala Mata, in Bengal, is a goddess who rode an ass and carried a broom and a water vessel; she is often naked (or dressed as a married woman) and wore a winnowing fan on her head. 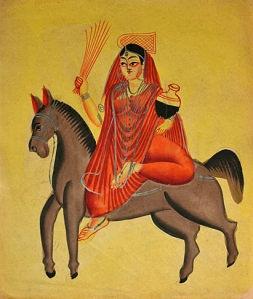 Smallpox was generally known as the spring disease in Bengal because epidemics struck in the spring when the air was relatively dry, and miraculously, the illness appeared with the first rains.

In Rajasthan, Sitala was portrayed as one of the seven sisters who sometimes had a brother or other male associate. She still loved the cold and coolness, particularly in the desert. She liked cold food offerings that were cooked the day her feast was celebrated. It was the measles that was caused by the anger of Sitala Mataji. The measles rash represented heat and dirt that had to come out lest the child die. Hindus may refer to measles as Choti mata (the smaller mother) whereas smallpox is bari mata (the larger mother).

Before the eradication of smallpox in 1977, Sitala was associated with smallpox (Davis, 2015).

Sitala Mata’s primary association was with smallpox, although occasionally she was given other roles and powers, including that of protector of children and giver of good fortune.

According to the believers of Sitala, if the goddess was properly worshipped, she was kind and forgiving, but if she was ignored, she was the potent harbinger of smallpox. If she was angry, she brought heat, fever, itchiness, and the sores of the pox. Sitala was also the cool one and a constant reminder of the necessity of maintaining the proper balances of hot and cold, yin and yang.

In Rajasthan, a major fair was held in honor of Sitala during March or April of each year. This festival continued, according to Dr. Davis for Sitala Mata always needs to be appeased so that her wrath will not bring on other epidemics.

Searching for Sitala Mata: Eradicating Smallpox In India, a memoir written from the author’s point of view, is a compelling true story of a brave woman’s important role in eradicating the dreaded deadly disease in the 1970’s. Dr. Cornelia E. Davis also known as Dr. Connie Davis, or during that time, Camel Lady, recounted her experiences as a young doctor in India. She also gave away helpful information about smallpox and other Medical Science terms in this memoir. In addition to that, Dr. Connie Davis also defined the commonly used non-English terms in India while telling her story without making it a hard read for anybody. The difference between the things then and now were also carefully pointed out as the story goes on. Furthermore, the Indian Culture, both from the then young doctor’s perspective and the textbook explanations, was put in the picture properly as well. The black American female doctor also truthfully shared her thoughts about the simplest things– things that even a person who’s not into Scientific stuff can comprehend. Things that are sometimes not even related to smallpox. Things about life. The book itself is written in such a way that the reader will feel as though he/she is reading a close friend’s journal and this is what I love the most about reading this literature.

Reading this book has been an enjoyable experience for me. Even though the title may seem intimidating and might seem too deep for others to pick especially for those who think they don’t have enough knowledge about the disease, I still want to recommend it. The book tells an important story that isn’t found in textbooks anywhere. It’s really sad that as a pre-med student who had a lot of Science subjects in college and before that, I never once heard of Dr. Davis and any of her significant historical and medical achievements before. (And I’m glad that I somehow got to play a role in spreading the word about this specific feat now as a book blogger.)

Searching for Sitala Mata: Eradicating Smallpox In India easily made it to my favorite books list. The fact that it is a memoir that is filled with information about culture, religion, and Science but isn’t written in a boring tone made me love it so much. The imperfect but highly notable true story of how a brave Black woman made history while fighting sexism and the caste system to get rid of a disease that caused countless deaths during that time is enough reason to read this book. It’s not so relatable but in this book, you’ll witness how a person who made history, is fully human like the rest of us– how a normal person who gets afraid, sad, tired, gets disgusted by filth and takes time to enjoy the simple leisures of life like shower, tea, coffee, and romance, has made a difference, and is still making a difference, by choosing to make a difference. Read it, and you’ll see what I’m talking about! 🙂

Note: I would like to thank the author, Cornelia E. Davis, MD, MPH, for sending me a signed paperback copy of her memoir. This did not affect my review in any way.

Dr. Davis is generous enough to e-mail me two photographs of her taken by the Indian government during her two-year mission with World Health Organization (WHO).

In the picture below, we can see Dr. Cornelia Davis at a smallpox supervisory team meeting and she is sitting before a photo of Indira Ghandi.

Here, she is on the far right in a sari. 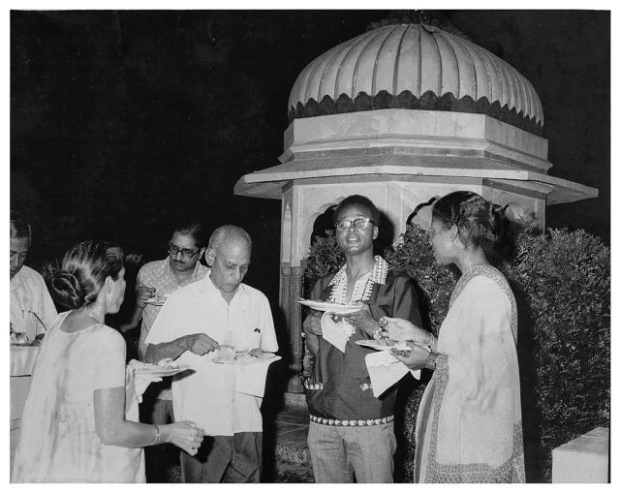 You probably heard that Smallpox is now only a thing of the past. That’s what schools taught us… or at least our Science teachers did. But have you heard of who’s behind that medical historical success?

I know, I was shocked too! Dr. Cornelia E. Davis deserves recognition more than what she’s currently getting right?

I’m really hoping that one day, her name would appear in Science textbooks too! It’s just right, don’t you think?

If you enjoyed reading this review, there’s a similar book I’d like to recommend to you called Surgery on the Shoulders of Giants: Letters from a Doctor Abroad by Dr. Saqib Noor. This one is an even lighter medical memoir that’s full of the author’s beautiful thoughts about life, family and being a doctor. I’m sure you’ll love this one especially if you’re someone who’s planning to pursue a medical career. 🙂

Readers who doesn’t have a medical background can surely enjoy reading these medical memoirs too. That’s guaranteed!

Dr. Cornelia E. Davis MD has worked for more than thirty five years in International Public Health on various infectious diseases in twenty African and Asian countries. Her first book Searching for Sitala Mata, Eradication of Smallpox in India recounts her two years working in a program considered to  be one of the great medical achievements of the past century.

Last July 06, 2017, a day after this review was published, the author Dr. Cornelia Davis, informed me via e-mail that my review has been posted on Amazon’s Editorial Reviews Section along with two trusted and big review sites, Kirkus and Indie Reader.

How cool is that? I guess we’re getting somewhere. 🙂

That’s it! Thank you so much for reading this review. I hope you enjoyed reading it and see you in my next post! ❤ Have a great day!